Nine years ago today I made the single best choice of my life and married The Hubs. We had an amazing anniversary and just marveled at everything we have been through, good and bad. Nine years seems like forever, but we both remembered our wedding like it was yesterday. As we walked along the river after brunch today, I started having some Very Deep Thoughts. We were discussing our sweet little E, each other, funny memories, and of course, adoption. Talking or thinking about adoption is a pleasant thing, lately. For a while it wasn’t. But there is one adoption aspect that is bothering me.

Everyone from our adoption education class (cohort) and the two classes after us have adopted already. In fact, so many people have adopted that there are only 8 home-study ready families, including us, even left remaining in the waiting pool! I’m not wallowing in self-pity, but it does make me feel a bit sad. Also, I stumbled upon another surprising emotion while reflecting on why this bothered me: indignation.

Here’s why. Getting passed over and being second choice again and again makes me feel very defensive of my family. It isn’t only because we haven’t adopted yet, but because not being picked feels a lot like being the last kid standing alone after all the cooler students have been chosen for teams in gym class. It feels worse than that, because this is my family. I’m not saying I’m anything special; however, I’m sure married to someone who deserves that title. And I will take credit for birthing the other member of this family who is absolutely something wonderful. Not just because he’s my son. Because he’s good, and kind, and generous, and loving. 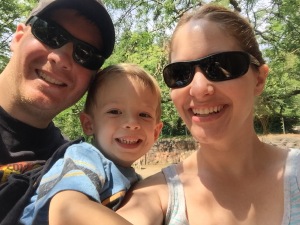 And while initially it irritates me that my amazing husband and kind little boy (and myself) aren’t being chosen to adopt, my emotions after irritation are quite different. I feel very sorry for those who have reviewed/will review our profile but moved on. They missed out on the best father any kid could ever have. I can state without hyperbole that I don’t think I could find one fault with the Hubs and his role as Dada. He’s just a great guy who fulfills every aspect (playing, learning, nurturing discipline) of fatherhood effortlessly. It just comes naturally. And E has all the makings of a great big brother. He’s sensitive, empathetic, and loving. He loves being a helper. E will be one of those older siblings who looks out for his little brother/sister. He asked for a long time when his baby was coming; he would ask God every night during bedtime prayers. He hasn’t done that in a while, and I feel scared that maybe he “gave up.”  I hate the idea of my little boy losing faith in his prayer. After all, he’s 3; he’s not sure how the whole faith thing works just yet!

I ache for any expectant mother (or father) who is on the heartbreaking, emotional journey of placing their baby for adoption. I have read that many birthmothers say a great deal of stress was lifted after they found the “perfect family.”  I’m not even going to entertain the idea that we are perfect. That’s pure silliness. But we are most assuredly a family that could put some of an expectant mother’s stress at ease if she met us and saw what we are: a genuinely joyful, imperfect, adoring couple who choose to lead very kid-centered lives devoted to parenting, with a bottomless-soda glass amount of love to shower upon a new member of the family. The thing I wonder is, why isn’t it enough?

I just had an interesting thought: I think if I was an expectant mother and I was interested in choosing an adoptive couple that had a child already, I would want to meet the kid. You could tell a lot about the hopeful adoptive parents just from sizing up their child, I bet. You could also see the parents interacting with their son or daughter and decide if that’s how you would want your baby to be treated (or not). It’s a good idea, right?

Just to drive this point home once more, I don’t dwell on the above very often. Usually only after I hear someone else has just adopted, or after we hear we were second choice again. I’m doing a great job of enjoying the blessings in front of me and not obsessing about the ones we hopefully we have one day. But as anyone who has adopted would certainly agree, there are inevitably going to be moments where you question yourself as well as the process. Mostly the process.

3 thoughts on “Perhaps I Didn’t Make This Clear: My Family is Awesome”

Chronicles of a Crocheting Spoonie